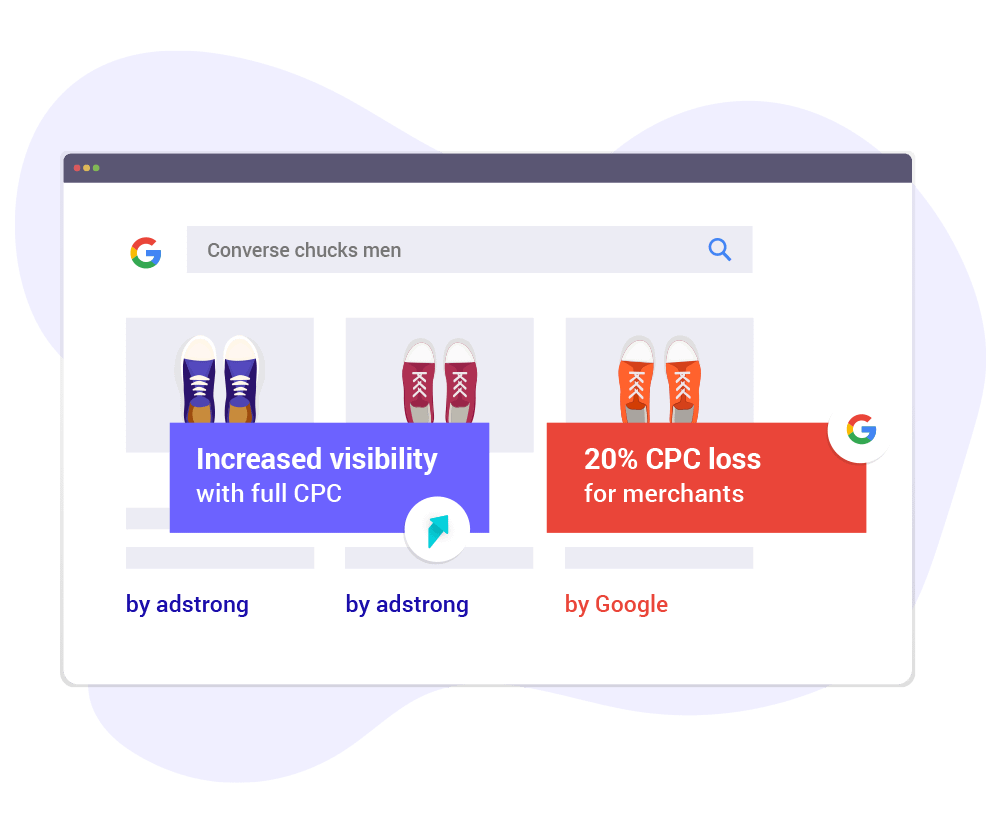 Beat your competition with our 25% CPC Boost now!

adstrong is a certified Google CSS partner. This status raises the impact of all Google Shopping CPCs by 25% – i.e. your CPC settings stay the same but Google treats your CPCs as if they were 25% higher!

Sign up with adstrong CSS now and benefit from this 25% CPC Boost! Signup only takes 3 minutes and you can cancel our service at any time.

Get your adstrong CPC Boost without any risk now!

More than 1,500 merchants with over 50 million products are part of the adstrong CSS.

We follow high standards regarding data security and never pass customer data on to third parties.

Make your campaigns 25% more competitive – with just one click!

Get double the support

Keep your Google support (incl. agency support) and benefit from the dedicated adstrong support on top!

„The adstrong CPC Boost does what it promises - we get more conversions while spending the same. The support from adstrong is quick and competent and was able to clarify all our concerns immediately.“

„Since using adstrong CPC Boost, my Google Shopping CPCs have dropped significantly but the performance stayed the same. The migration was extremely quick and straightforward and I still have access to my historical data.“

„adstrong has helped us to successfully implement all the advantages of the CPC Boost - and all at a very affordable price. We have a complicated setup with different tools in various markets which another CSS partner couldn't handle.“

By default, each merchant center uses Google Shopping Europe (GSE) as their CSS partner. That means that 1.00 € bids of these merchants are treated as 0.80 € bids by Google. But merchants can migrate to certified Google CSS partners such as adstrong. Therefore, if you don’t do anything, 20% of your Google Shopping expenses will be wasted. It’s time to switch to adstrong CSS and leverage the CPC Boost!

In short: yes you can. This is the right strategy if your goal is to save money or to increase your margin while keeping your traffic volume steady.

If you want to increase your traffic volume and budget while keeping your margin relatively steady, it’s better to not reduce your CPC settings.

In which countries does the CSS program work?

The Google CSS program is currently active in 27 European countries and adstrong is certified in all of them. That means that the CPC Boost only works for campaigns that are active in these countries: Austria, Belgium, Czech Republic, Denmark, Finland, France, Germany, Greece, Hungary, Ireland, Italy, the Netherlands, Norway, Poland, Portugal, Romania, Slovakia, Spain, Sweden, Switzerland, United Kingdom.

I'm using a Multi Client Account (MCA) - anything to be aware of?

The link between the Merchant Center & the Multi Client Account is lost with the CSS switch. Therefore, make sure that you also have direct admin access to the MC, so that you can continue working undisturbed.

Does adstrong need access to my data or accounts?

No, we do not need access to your data or accounts to provide you with the CPC Boost. This is because the actual CSS change is done directly by Google.

Data security is very important to us! If you give us access to your data, we will only use it in the case of support requests to help you better. We never use your data to run ads ourselves and we never pass your data on to third parties.

Registration takes less than 3 minutes – just click on the “Try now” button and fill out the form. We will have your 25% CPC boost set up for you shortly and you will enjoy the full competitive advantage.